View of Bangalore from the Lemon Tree Hotel 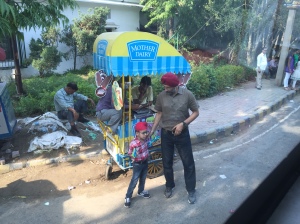 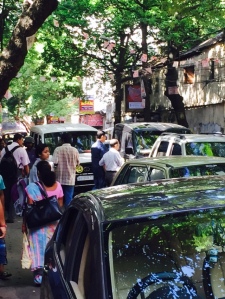 Growing up in rural NH and having lived in Maine, Vermont, and now back in NH, I am used to a rural lifestyle. My husband, sons and I live in a small house and own 25 acres of land with a large yard, a pond, hiking trails, forest, and we can’t see anyone from our property. My commute to school is an easy 2 miles. For other major services like gas stations, banks, grocery stores, and so forth we have to travel between 3 and 20 miles.  We do a lot of driving but driving is easy because there is little traffic unless we drive in a more urban area. The region is beautiful in every season and we enjoy spending time outside with only the sounds of the birds and wind.  The population density of Orford, NH where I live is 9 people per sq/km. The population density of the state of New Hampshire is only 57 people per sq/km.

Then I went to India for 3 weeks and spent time in Bangalore, Kolkata, and Delhi. Life is different.

Now, this wasn’t my first experience visiting a city as a country mouse. I’ve spent time in many American cities like Boston, New York, Washington, DC, Philadelphia, and Seattle. None of those cities really compare with Indian cities. The combined populations of those American cities doesn’t match up to Bangalore, Kolkata, or Delhi.

Let’s start with population and density:

It is an understatement to write that there are a lot of people in India and especially in these rapidly growing urban areas. People are everywhere.

There is little evidence of organized city planning. There are some grand boulevards, green spaces, major monuments and temples, modern airports, multinational corporations, luxury shopping, all mixed in with slums, middle class neighborhoods, hotels and restaurants, schools, local businesses, and sidewalks teeming with food carts, tiny businesses, tea stands, and people living and sleeping on the streets.  People of all stations in life just go about their daily business.

I mentioned traffic in an earlier post. Traffic in Kolkata and Delhi is even worse than in Bangalore. Horn honking contributes to the noise and is used as a means of communication to warn pedestrians, rickshaws, and other obstacles of your oncoming vehicle. In the US, horns tend to be used more to express a driver’s anger at a particular driving situation.

Trash is another ubiquitous sight in Indian cities. Every vacant lot that I observed was filled with trash. It was common to see a loose cow or dog rooting through trash piles evident on the sides of roads and sidewalks. While there were trash bins in some locations, they weren’t as widely available as they are here.  Waste disposal is one of India’s many paradoxes.  For a country that has such massive human resources in science and engineering, waste disposal and clean water are still an issue.

Another urban paradox were the museums. Our hosts generously took the time to bring us to the Indian Museum and the Marble Palace which are 2 of Kolkata’s major museums.  Both had priceless artifacts and paintings but the methods of artifact preservation really need to be upgraded. The impressive Marble Palace was not air conditioned and given the heat and humidity of Kolkata, the extensive collection of paintings were not in good condition.  The Birla Industrial and Technology Museum had some of the best science and math exhibits I’ve ever seen in a museum. This was the first time I’ve seen exhibits with manipulatives that explain different aspects of electricity or calculus. While I didn’t understand everything I was looking at, it was still pretty awesome.

Prior to this experience, I viewed cities through my American “lens”. Boston, New York, and Philadelphia are three of our oldest cities and all have had their growing pains.  There are always issues with trash, traffic, people, etc. in any city. Driving in Boston is chaotic and doesn’t always make sense but when one spends enough time there, it starts to make a little more sense. This is true for Indian cities as well. By the end of our week in Kolkata, we could walk around with a much better understanding of our little neighborhood, what was going on there, and that people go about their business of living their lives.